Chelsea, Mass - East Cambridge Savings Bank, a $1.6 billion dollar in assets mutual bank based in Cambridge, Mass., recently made a $10,000 donation to The Neighborhood Developers (TND), a Chelsea based nonprofit organization. The donation directly supports TND programming and sponsors the organization’s annual “Raise the Roof” event. TND is a community development corporation (CDC) that focuses its work on improving the quality of life for residents in Chelsea, Everett, and Revere by promoting affordable housing and sustainable economic development.

“East Cambridge Savings Bank has partnered with The Neighborhood Developers for many years, and we are thrilled to once again support their mission of advocating for residents of Chelsea and surrounding communities to ensure that these cities remain affordable places to live for as many of our neighbors as possible,” said Gilda M. Nogueira, the Bank’s president and chief executive officer. “While it is a positive sign to see new development and growth in these vibrant communities, organizations like The Neighborhood Developers play a critical role in encouraging mixed income and affordable housing for working class and long-term residents.”

Rafael Mares, executive director of The Neighborhood Developers noted that, “With more and more people being priced out of immigrant gateway cities like Chelsea, Everett, and Revere, we need to do everything we can to keep these communities affordable for their residents and preserve the critical role they play in our region. The donation from East Cambridge Savings Bank directly supports our mission to create strong neighborhoods enabling community members to secure a stable home, achieve economic mobility, and determine their own future.”

The Neighborhood Developers is eligible to receive donations through the Commonwealth of Massachusetts Community Investment Tax Credit (CITC) program. Enacted in 2012, the CITC encourages individuals and businesses to support community development corporations that work to improve economic opportunities for low-and middle-income residents. TND is considered a Gateway Community Partner as the organization’s work focuses on the Gateway Cities of Chelsea, Everett, and Revere.

“Raise the Roof”, The Neighborhood Developers annual event, will take place on September 15 in Chelsea. You can learn more about the event at TND’s website.

About East Cambridge Savings Bank:
East Cambridge Savings Bank is a full-service mutually held bank that is committed to be the preferred banking partner in the communities it serves. Established in 1854, the Bank strives to provide an exceptional customer experience and generous support for the community. Headquartered in Cambridge, the Bank has locations in Arlington, Belmont, Cambridge, Chelsea, Malden, Medford, Somerville, Waltham, and Woburn as well as an educational training facility at Cambridge Rindge and Latin School. The Bank is a member of the Federal Deposit Insurance Corporation (FDIC), the Depositors Insurance Fund (DIF), and is an Equal Housing Lender.

About The Neighborhood Developers:

The Neighborhood Developers (TND) is a certified Community Development Corporation (CDC) based in Chelsea, MA that develops healthy, affordable, and sustainable housing and connects residents to living wage jobs in Chelsea, Revere, and Everett. Their mission is to create strong neighborhoods enabling community members to secure a stable home, achieve economic mobility, and determine their own future. 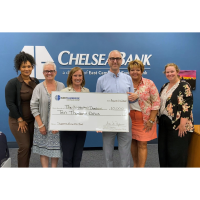